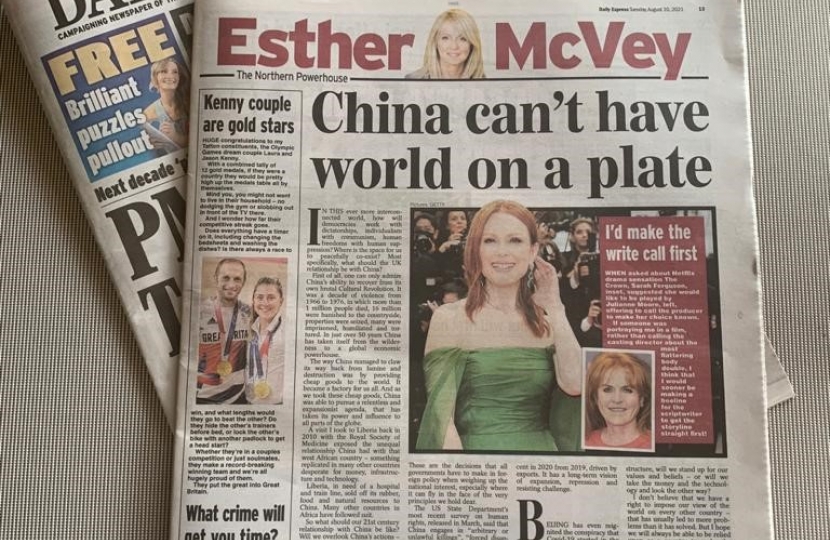 IN THIS ever more interconnected world, how will democracies work with dictatorships, individualism with communism, human freedoms with human suppression? Where is the space for us to peacefully co-exist? Most specifically, what should the UK relationship be with China?

First of all, one can only admire China's ability to recover from its own brutal Cultural Revolution. It was a decade of violence from 1966 to 1976, in which more than 1 million people died, 16 million were banished to the countryside, properties were seized, many were imprisoned, humiliated and tortured. In just over 50 years China has taken itself from the wilderness to a global economic powerhouse. The way China managed to claw its way back from famine and destruction was by providing cheap goods to the world. It became a factory for us all. And as we took these cheap goods, China was able to pursue a relentless and expansionist agenda, that has taken its power and influence to all parts of the globe.

A visit I took to Liberia back in 2010 with the Royal Society of Medicine exposed the unequal relationship China had with that west African country - something replicated in many other countries desperate for money, infrastructure and technology.

Liberia, in need of a hospital and train line, sold off its rubber, food and natural resources to China. Many other countries in Africa have followed suit.

So what should our 21st century relationship with China be like? Will we overlook China's actions - such as its dismantling of democracy in Hong Kong or its human rights breaches against Uyghurs in Xinjiang - in favour of our own economic and infrastructure needs? Do we put our security concerns about China aside to ensure we have the energy and telecoms infrastructure we desire?

These are the decisions that all governments have to make in foreign policy when weighing up the national interest, especially where it can fly in the face of the very principles we hold dear.

The US State Department's most recent survey on human rights, released in March, said that China engages in "arbitrary or unlawful killings", "forced disappearances", "politically motivated reprisals outside its country", "pervasive and intrusive technical surveillance and monitoring, "serious restrictions on free expressions, press and the internet" and "forced labour and trafficking".

China was the only major economy that grew last year, up 2.3 percent in 2020 from 2019, driven by exports. It has a long-term vision of expansion, repression and resisting challenge.

Beijing has even reignited the conspiracy that Covid-19 started in the Fort Detrick lab in Maryland, after it rejected the World Health Organization's proposals for a second investigation into the origins of coronavirus in a Wuhan lab.

As the UK looks for investment to recover from Covid and takes on the challenges of the future from energy to technical infrastructure, will we stand up for our values and beliefs - or will we take the money and the technology and look the other way?

I don't believe that we have a right to impose our view of the world on every other country - that has usually led to more problems than it has solved. But I hope we will always be able to be relied upon as a country to make the case for political and economic freedom, even if it upsets a country as powerful as China.

The UK must never allow itself to be cowed by anyone nor make bad decisions out of desperation.

The reason we need a strong economy is so that we can always make principled choices.