'It's time to turn our attention to the 'Pupil Missing rate', says Esther McVey in today's Daily Express 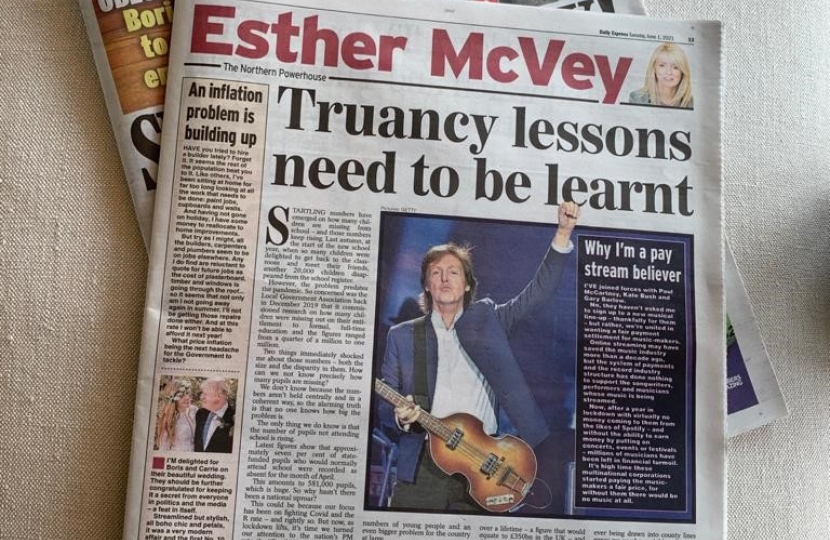 Startling numbers have emerged on how many children are missing from school - and those numbers keep rising. Last autumn, at the start of the new school year, when so many children were delighted to get back to the classroom and meet their friends, another 20,000 children disappeared from the school register.

However, the problem predates the pandemic. So concerned was the Local Government Association back in December 2019 that it commissioned research on how many children were missing out on their entitlement to formal, full-time education and the figures ranged from a quarter of a million to one million. Two things immediately shocked me about those numbers – both the size and the disparity in them. How can we not know precisely how many pupils are missing?

We don’t know because the numbers aren’t held centrally and in a coherent way, so the alarming truth is that no one knows how big the problem is.

The only thing we do know is that the number of pupils not attending school is rising.

Latest figures show that approximately seven percent of state-funded pupils who would normally attend school were recorded as absent for the month of April.

This amounts to 581,000 pupils, which is huge. So why hasn’t there been a national uproar

This could be because our focus has been on fighting Covid and the R rate – and rightly so. But now, as lockdown lifts, it’s time we turned our attention to the nation’s PM rate, the “Pupil Missing rate”.

We urgently need to know how many children are missing out on their formal education, who they are and where they are, and get them back in school. Otherwise we’ll be building up big problems for large numbers of young people and an even bigger problem for the country at large.

We know education is the biggest single predictor of future outcomes for an individual, from health to income. The Institute of Fiscal Studies recently reported that missing just six months of study could cost pupils £40,000 of lost income over a lifetime – a figure that would equate to £350bn in the UK – and those with low academic achievements are five times more likely to be in poverty compared to those with high levels of achievement.

As for the prison population, 59 percent of inmates say they had regularly played truant from school.

With more young people than ever being drawn into county lines gangs we need our children back in schools being educated, making friends and out of harm’s way.

It is vital the Government gets to the bottom of not just the numbers but also the reason why so many people are missing from school.

How can we not know what up to a million of them are doing?