Further delays for promised 2 trains an hour service for Knutsford 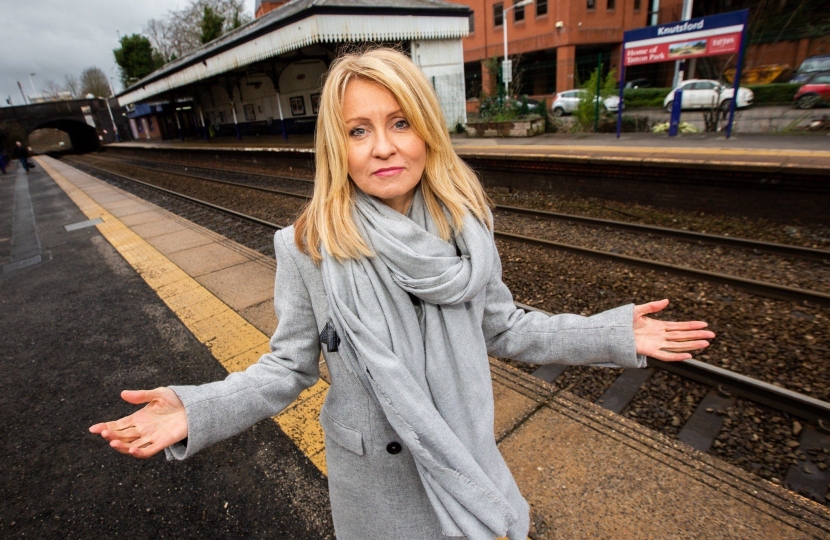 Esther McVey is demanding answers after she discovered rail bosses had put the brakes on plans to introduce two trains an hour from Knutsford to Manchester.

She had previously asked government to step in and ensure the upgrade – which had been repeatedly delayed happened - given it was included in the train operators’ franchise bid in 2015.

Now Northern appear to have postponed the plan, according to information given to Ms McVey by Transport Secretary Chris Grayling.

Ms McVey said: “This is extremely disappointing news for my constituents who use the line and have been repeatedly promised an upgrade. It is unacceptable to have such an unreliable and irregular service in such a busy part of the country. The increase in service was part of the franchise bid and I and everyone else expects Northern to deliver this.

“I will be speaking with the Department for Transport and setting out why this service is vital and that I expect support from them to get the extra services delivered. My constituents deserve a proper explanation as to why this has been postponed and a timetable to get it back on track as promised.

“I met with Northern last month to discuss transport issues and we discussed this issue and at no point did anyone say it was going to be postponed so I will be speaking to them again to find out why things have changed so suddenly.”

After Northern won the Mid Cheshire Line franchise bid in 2015 it promised the extra train an hour, which was due to begin in December 2017.

Mr Grayling made enquires about the trains after Ms McVey raised the issue in Parliament earlier this year.

In his letter he said he had been advised by the Rail North Partnership that the proposals had been postponed, as both Northern and Network Rail believe additional paths cannot be accommodated without “adversely affecting the reliability of other services on the network.”

He wrote: “I know this will be disappointing to you and to the residents of Knutsford. The requirement for the second train per hour from the Mid-Cheshire line to Manchester remains part of the train Service Requirements of the franchise agreement. However, Northern did not put in a bid to run this service in the May 2019 timetable, as, until there are some more fundamental changes to all operators’ services between Stockport and Manchester, the same delivery challenges remain.”

Mr Grayling said Knutsford commuters will benefit from new rolling stock, including removing the outdated and unpopular Pacers by the end of 2019 and the station itself will be refurbished with a new waiting shelter and new seating.

In addition to raising the matter with the Department for Transport Ms McVey has also written to Northern demanding an explanation.