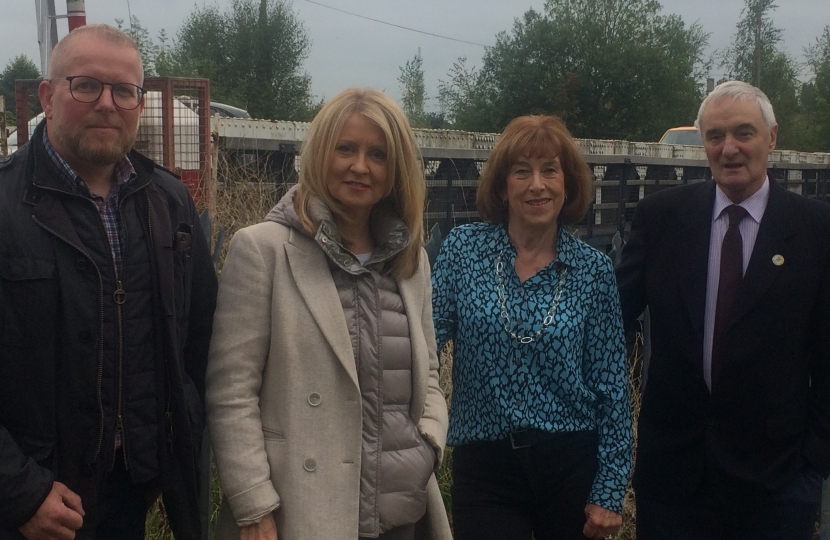 Esther McVey and councillors are urging council chiefs to decide the best way to resolve infrastructure and traffic problems blighting communities around Winnington – amid fears a delay could result in the area missing out on Government cash.

The Tatton MP, Marbury Conservative Councillors and Cheshire West Conservative Group, believe traffic easing measures are needed and the recent repairs to the bridge are not a long-term solution. Money is available as part of Government’s Levelling Up Fund but Cheshire West and Chester Council must submit a fully costed proposal if they are to bid in the upcoming round.

Deputy Leader of the Conservative Group Councillor Lynn Gibbon said: “The Council need to complete the costed business case, environmental assessments, ground investigation work and further traffic modelling, while considering the impact of possibly another 1600 new homes on the Tata site, on existing communities, residents and businesses in the area. Decisions are required now to develop an infrastructure which meets the needs of Northwich communities.”

Residents in the villages of Barnton, Anderton with Marbury, Comberbach, Little Leigh and Winnington, are said to be being impacted by the increase in traffic and are concerned by air quality. Other concerns raised to the councillors include insufficient zebra crossings for pedestrians along the A533 and the C618 and the detrimental impact on house foundations caused by HGVs. There are also serious concerns for safety around the bend at Marbury Hollows and the danger for pedestrians accessing Marbury Park.

Councillors have been told there are three options, varying in size and cost, being looked at by council chiefs but the preferred option to put forward has not been decided.

Ms McVey said: “We need a resolution to this problem long term and I fully support a bid to the Government for this project but we need to know the Council’s preferred option so we can put in the required, fully costed bid.”

Councillor Gibbon, along with Phil Marshall and Norman Wright said they will support all efforts to resolve this situation and urged the Labour administration to “get a move on”.

They added: “Preparation needs to step up a pace to enable bids to be submitted and enable work to start on easing the areas traffic congestion.”

The £4.8 billion Levelling Up Fund will be spent across the country for town centre and high street regeneration, along with local transport projects and cultural and heritage assets.