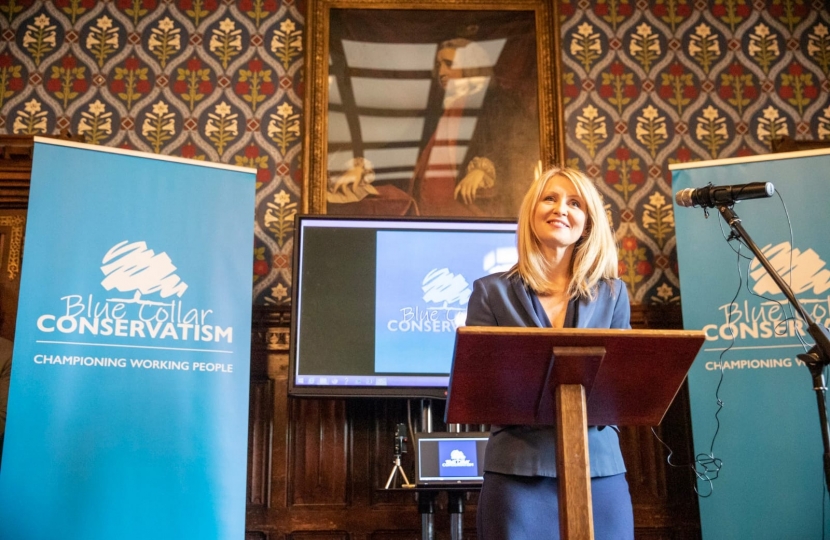 Tatton MP Esther McVey has launched a group aimed at starting a conversation to develop policies for the Conservative party in a post-Brexit Britain – including calling for more funding for education and policing.

Blue Collar Conservatism is about championing working people and developing an agenda that benefits communities. Ms McVey wants regular people to have a voice and refocus the debate from Brexit to domestic issues including health, education, infrastructure, policing and transport, including scrapping HS2.

She is supported by 11 other MPs who are part of the top team and the group has attracted support from nearly 100 MPs already. As well as asking for people to get in touch, they will take the message out to all parts of the country and hold meetings in pubs.

Ms McVey said: “What people want is for us to deliver Brexit and then get on and deliver policies that matter to them and their families and that is why I am launching Blue Collar Conservatism.

“We desperately need more funding for our schools across Cheshire, that is what I have been calling for in Parliament and that is what this project is about – things that really matter to people. We need to support our Police and put more money into keeping communities safe.  In March 17-year-old Yousef Makki was stabbed in Hale Barnes, knife crime is a problem and people and concerned.

“Last summer I held a series of events in pubs in some of the most rural parts of the constituency and met with many people who told me what they wanted to see happen and I hope to meet many more on the tour to help develop an agenda we want that can deliver for the people of Cheshire and the country.”

At the launch Ms McVey called for an extra £4 billion for education and £3 billion for community policing.

Ms McVey said the money could be found by slashing overseas aid spending to its 2010 level of £8.5 billion as the current spend – which is ring fenced at 0.7 per cent of GDP – has meant spending has almost double in less than a decade.

Ms McVey added: “Now is the time to reach out and listen and hear what people have got to say, what they want money spent on and we need to deliver it. We need a narrative for a post-Brexit Britain and Conservative Party to unite around which focuses on aspiration and opportunity. All the MPs in this group believe passionately about this and we have been having conversations across the country and time and time again we are being told people want action on policing and education. People want to know their street is safe, want their children to go to a good school, want good NHS services, want to know we are tackling knife crime as well as creating new jobs, reducing unemployment and strengthening the economy and this group is going to listen and push to make it happen.”

Ms McVey believes BCC will appeal to many sections of society and said someone needs to give hard-working people, let down by Labour, a voice

She added: “Under Jeremy Corbyn Labour has abandoned working people. Traditional Labour voters have been let down and taken for granted. Labour wouldn’t know a working class person if they fell over them and we must reach out and listen. The Conservative Party is on their side. Hard working people who take responsibility for their lives should be rewarded.”