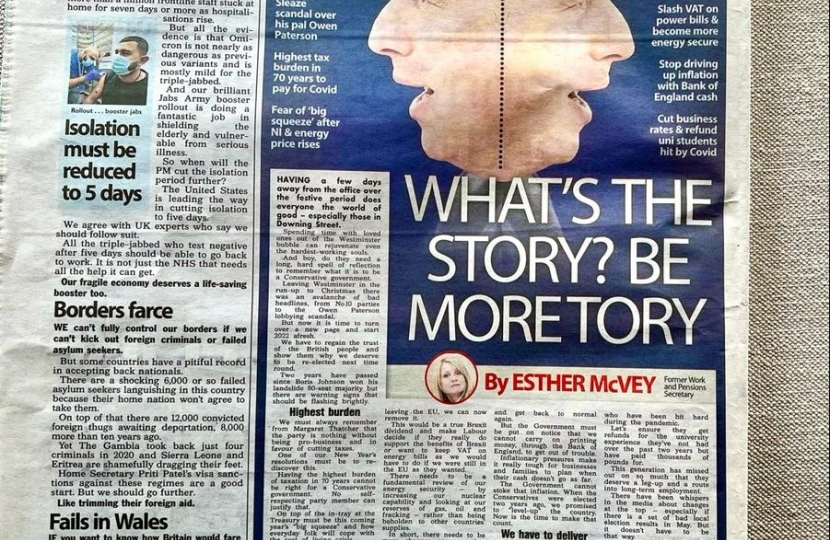 HAVING a few days away from the office over the festive period does everyone the world of good – especially those in Downing Street.

Spending time with loved ones out of the Westminster bubble can rejuvenate even the hardest-working souls.

Leaving Westminster in the run-up to Christmas there was an avalanche of bad headlines, from No 10 parties to the Owen Paterson lobbying scandal

And boy, do they need a long, hard spell of reflection to ­remember what it is to be a Conservative government.

Leaving Westminster in the run-up to Christmas there was an avalanche of bad headlines, from No 10 parties to the Owen Paterson lobbying scandal.

But now it is time to turn over a new page and start 2022 afresh.

We have to regain the trust of the British people and show them why we deserve to be re-elected next time round.

Two years have passed since Boris Johnson won his landslide 80–seat majority but there are warning signs that should be flashing brightly.

We must always remember from Margaret Thatcher that the party is nothing without being pro-business and in favour of cutting taxes.

One of our New Year’s resolutions must be to re-discover this.

Having the highest burden of taxation in 70 years cannot be right for a Conservative government. No self-respecting party member can justify that.

On top of the in-tray at the Treasury must be this coming year’s “big squeeze” and how everyday folk will cope with the cost of living crisis.

Families will be feeling the pinch in their pockets already but it’s only going to get worse this year — and probably much worse.

It starts with a National Insurance rise to pay for NHS and social care that will come out of pay packets from April. We are also already seeing a hike in energy costs that could set households back many hundreds of pounds this year.

The first thing ministers could so is slash VAT on energy bills. This should be easy enough to do since, after leaving the EU, we can now remove it.

This would be a true Brexit dividend and make Labour decide if they really do support the benefits of Brexit or want to keep VAT on energy bills as we would have to do if we were still in the EU as they wanted.

There needs to be a fundamental review of our energy security — by increasing our nuclear capability and looking at our reserves of gas, oil and fracking — rather than being beholden to other countries’ supplies.

In short, there needs to be more cheaper energy rather than always the greenest energy.

The cost of living could prove to be the biggest headache for Boris Johnson this year as we hopefully view the pandemic out of the rear-view mirror and at last learn to live with Covid.

Any temptation to implement more pandemic restrictions would be a hammer blow to thousands of businesses up and down the country.

As quickly as possible, we need to fully open up the economy without restrictions and get back to normal again.

But the Government must be put on notice that we cannot carry on printing money, through the Bank of England, to get out of trouble.

Inflationary pressures make it really tough for businesses and families to plan when their cash doesn’t go as far.

The Government cannot stoke that inflation. When the Conservatives were elected two years ago, we promised to “level-up” the country. Now is the time to make that count.

We have to deliver

The countdown to the next election has started, and if we can’t show voters in those Red Wall seats that we should be trusted again, they will stay at home or find another party.

One place to start is the High Street, where a major overhaul of the crippling business rates tax is needed.

The family business with a single shop needs to be on a more level playing field with online giants with warehouses in out-of-town sites.

Levelling up is all about creating opportunities, especially for young people who have been hit hard during the pandemic.

Let’s ensure they get refunds for the university experience they’ve not had over the past two years but have paid thousands of pounds for.

This generation has missed out on so much that they deserve a leg-up and a route into long-term employment.

There have been whispers in the media about changes at the top — especially if there is a set of bad local election results in May. But it doesn’t have to be that way.

It is clear that the Labour Party has nothing at all to offer the country, but we must not be complacent about the result of the next general election.

We have to deliver on the public’s priorities through our timeless Conservative principles.

We cannot squander the substantial majority we were handed to change the country for the better in a Conservative direction.

That would be unforgivable.