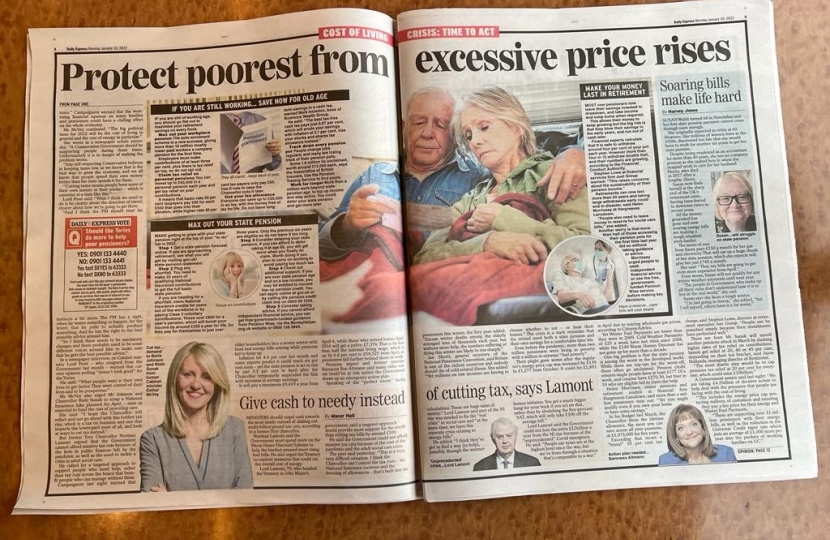 inflation of at least six per cent and families are struggling with well below-inflation pay rises – while hikes in energy costs could be putting pensioners’ lives at risk this winter.

Former work and pensions secretary Esther McVey warned the crisis would “cause huge difficulties for countless families up and down the country”, especially for those on fixed incomes such as the retired.

She added yesterday: “The Government must protect them from excessive price rises.”

While Mr Johnson’s onetime Brexit chief negotiator Lord Frost warned: “We need to get the country going economically again and that means free markets, free debate and low taxes.” Campaigners warned that the worsening financial squeeze on many families and pensioners could have a chilling effect on the whole economy.

Ms McVey continued: “The big political issue for 2022 will be the cost of living in general and the cost of energy in particular.”

She wrote in a newspaper article yesterday: “A Conservative Government should be supporting people during these times. Unfortunately it is in danger of making the problem worse.

“Any self-respecting Conservative believes in keeping taxes low, as we know that is the best way to grow the economy, and we all know that people spend their own money better than the state spends it for them.

“Cutting taxes means people have more of their own money in their pocket – which is essential at a time like this.”

Lord Frost said: “What I think we need to do is be clearer about the direction of travel, clearer about how we’re going to get there.

“And I think the PM should trust his instincts a bit more. The PM has a right, when he wants something to happen, for the levers that he pulls to actually produce something. And he has the right to the best possible advice around him.

“So I think there needs to be machinery changes and there probably need to be some different voices around him to make sure that he gets the best possible advice.”

In a newspaper interview, ex-Cabinet minister Lord Frost – who resigned from the Government last month – warned that current opinion polling “doesn’t look good” for the Tories.

He said: “What people want is their own lives to get better. They want control of their lives and to be prosperous.”

She said: “I hope the Chancellor will reflect and not go ahead with this further tax rise, which is a tax on business and one that impacts the lower-paid most of all, and look at ways to cut tax instead.”

But former Tory Chancellor Norman Lamont argued that the Government cannot afford massive tax cuts because of the hole in public finances left by the pandemic as well as the need to tackle a crisis in adult social care.

He called for a targeted approach to support people who need help, rather than tax cuts across the board that benefit people who can manage without them.

Campaigners last night warned that older householders face a severe winter with food and energy bills soaring while pensions fail to keep up.

Inflation hit 4.6 percent last month and some experts predict it could reach six per cent soon – yet the state pension is set to rise by just 3.1 per cent in April after the Chancellor temporarily suspended the link with increases in average earnings.

That is far less than half the national living wage, which is up by 6.6 percent to £18,525 from April, as pensioners fall further behind those in work.

Pensions expert and former minister Baroness Ros Altmann said many older voters could be at risk unless the Government draws up an emergency action plan.

Speaking of the “perfect storm” facing pensioners this winter, the Tory peer added: “Excess winter deaths among the elderly averaged tens of thousands each year, but without more help, the numbers suffering or dying this winter are likely to rise sharply.”

Jan Shortt, the general secretary of the National Pensioners Convention, said Britain is one of the richest countries and nobody should die of cold-related illness. She added: “Yet millions on low incomes are having to choose whether to eat – or heat their homes.” The crisis is a stark reminder that the retired need both a state pension and their own savings for a comfortable later life.

Even before the pandemic, more than two million pensioners were living in poverty with a million in extreme “fuel poverty”.

Their plight grew worse after the regulator’s energy price cap was increased by £139 to £1,277 from October. It could hit £1,891 in April due to soaring wholesale gas prices, according to Citizens Advice.

Yet Winter Fuel Payments are lower than they were in 2009. Cold Weather Payments of £25 a week have not risen since 2008, while the £140 Warm Homes Discount has not gone up for more than a decade.

One big problem is that the state pension is among the worst in the developed world. While there are top-ups for the worst-off, these often go unclaimed. Pension credit ensures single people have at least £177.10 a week, and couples have £270.30, but four in 10 who are eligible fail to claim the help.

Helen Morrissey, a senior pensions and retirement analyst at financial firm Hargreaves Lansdown, said more than a million pensioners miss out: “Yet you might qualify even if you own your home or have some savings.”

In his Budget last March, the Chancellor froze the lifetime allowance, the most you can save across all your pensions, at £1,073,000 for five years.

The case for funding a new Winnington Bridge to tackle the congestion and problems caused by the current one- way crossing has been made to Government.