Jam and bread for Tea! 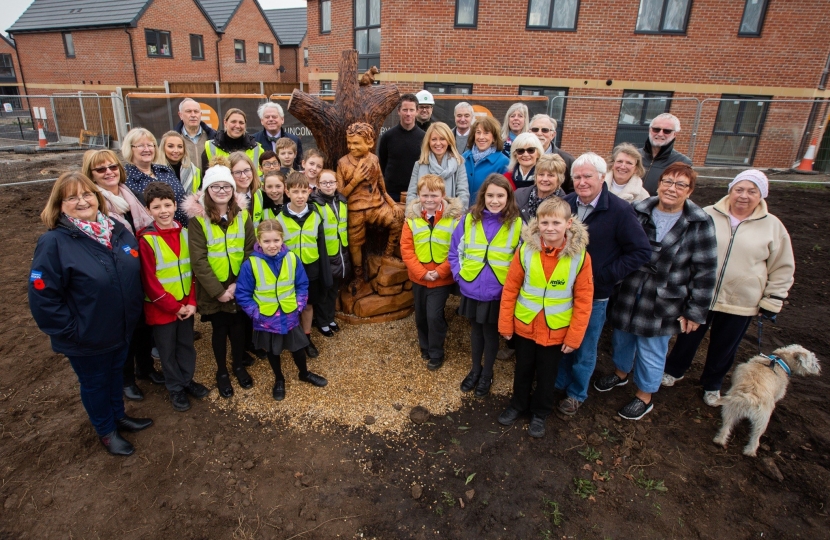 A statue of a Jam Butty Boy has been unveiled in Barnton.

The memorial will act as a reminder of how Barnton achieved its high home ownership in the 1950s with families living on bread and jam to afford their property.

The carving was funded with money raised by Barnton Community Group and created by Cheshire carver Andy Burgess.

Tatton MP Esther McVey unveiled the statue and said: “The statue will act as a constant reminder to generations to come of how hard families saved to own their own homes. It is an amazing carving and represents the story of the village and it was an honour to be asked to attend the unveiling of such a special piece of history.”

The carving was created from one piece of wood and Carver, Andy Burgess said the wood had red marks in it which he chose to leave in as it looked like jam coming out of the bread.

Barnton Community Group Chair Lynn Gibbon said: “The statue highlights the history of Barnton village which became prosperous with the building of the Trent and Mersey Canal opening up trade and the development of the chemical industry through Brunner Mond.

“These developments provided jobs and as the story goes many people bought their own homes and due to the high numbers of home ownership the village became known as ‘Jam Town’ as it was said they lived on jam and bread to achieve their dreams.”

This statue has been funded by a number of grants, including from Barnton Parish Council, The Coop and local Cheshire West and Chester Councillors for Marbury.

Lane End Developments provided advice and helped lay trunking for the lighting and provided the railings to secure the statue along with full landscaping once the development is complete. The Butty Boy is on the corner of Beech Lane at the junction with Runcorn Road.