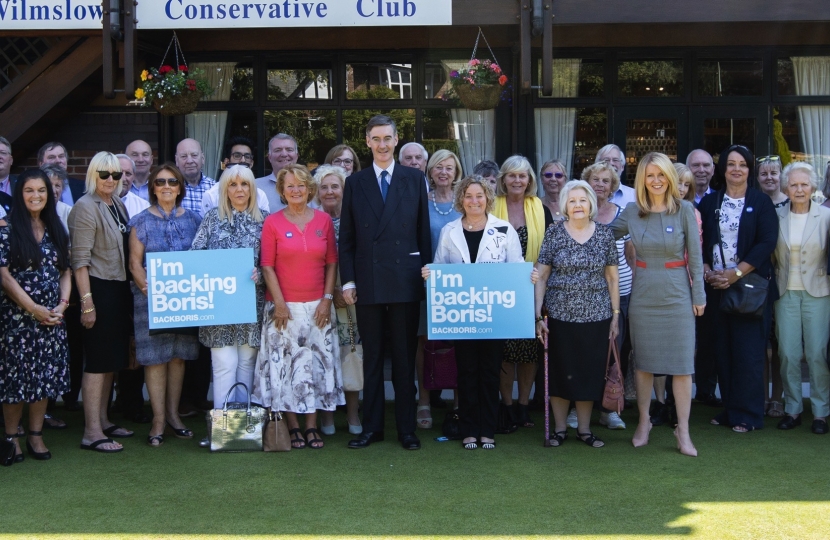 Leading Brexiteer Jacob Rees-Mogg arrived in Wilmslow last week to rally Conservative Party members to back Boris Johnson to be the next Prime Minister.

He was joined by Tatton MP Esther McVey for the event which was held at Wilmslow Conservative Club. Dozens of people pack into a room to hear why they should cast their vote for him.
Addressing the crowd Mr Rees-Mogg said: “Boris is a man who believes in Brexit and that members should keep that in mind when casting their vote for leader.” And he heaped praise on hosting Ms McVey saying she was “a woman of principle.”

The event allowed Party members to ask questions on why Mr Johnson was the best man for the job and issues ranged from how Brexit will be delivered, what was Mr Johnson’s vision post Brexit and how he will engage with young voters as well as rebuild trust with the public after a bruising EU referendum.

Ms McVey said: “I am supporting Boris as he has promised post Brexit to deliver on key domestic issues such as education and policing as well as ensuing the North gets the attention it deserves so we can continue to grow our local economy and create more jobs and opportunities for everyone. He is passionate, as I am about infrastructure and local services and that money is not wasted on projects like HS2.

“After we have delivered Brexit I believe he can unite the country. He has also pledged to support my Blue Collar Conservatism agenda which is about giving a voice back to regular voters, really listening to them and then delivering on policies that matter to people and their families. Boris is fully aware of how important this is and I will continue to make that known to him at every opportunity.”

Esther remembers the Holocaust in Westminster

Tatton MP Esther McVey signed the Holocaust Educational Trust’s Book of Commitment – honouring those who lost their lives and paying tribute to the survivors of the atrocities.