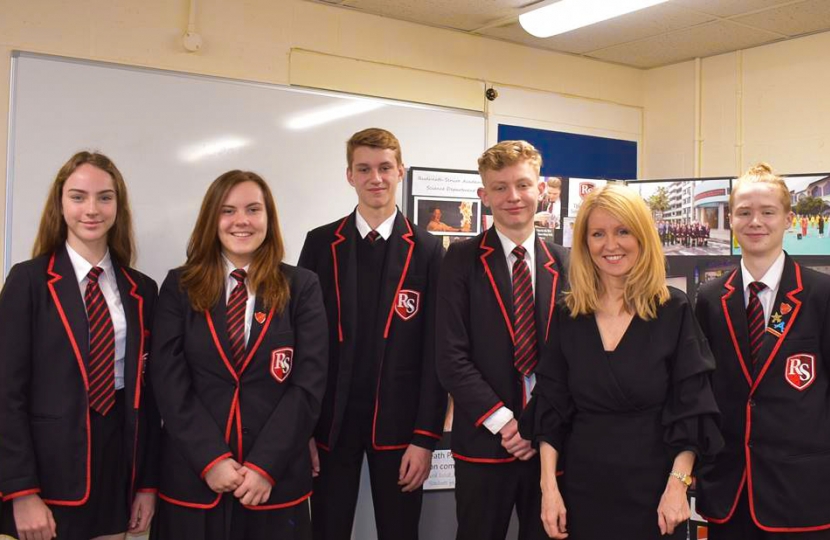 When I launched Blue Collar Conservatism I set out how the Conservatives needed to be bold and said that we would have to take ourselves out of our comfort zone if we are to rebuild trust with voters.

Every Conservative MP knows that the police and schools in their constituency are facing significant funding shortfalls and we must realign our priorities with those of voters. This is why I have promised to return spending on international aid to the historically high level under the last Labour government, freeing up £7 billion: £3 billion for police and £4 billion for schools, every year.

Education has always been a priority for me. For those of us whose politics are driven by a belief in aspiration and social mobility, education is key. Undoubtedly standards have risen over the past nine years and there are far more pupils attending good and outstanding schools today than in 2010 — something we must give teachers much greater credit for delivering.

However, all this good work is at risk due to sustained and severe underfunding. It’s time we started listening to the teaching unions and teachers on the frontline. I have always believed that in any walk of life those doing something every day know better than politicians, and it is time that we took far more notice of teachers whom we rely on to keep driving up school standards. The Conservative Party has lost the votes of many teachers in recent years, largely because they believed we weren’t listening to them. This must change.

If we, as a party, are not prepared to listen to what teachers and their unions are telling us about where the shortfalls are and what our priorities should be, we can’t properly claim to be a party that takes our children’s education seriously.

The National Education Union (NEU), underpinned by figures from the National Audit Office, has declared that schools are underfunded by about £2 billion. And 91 per cent of schools are facing further cuts to their funding over the coming months. For all schools, costs are far outstripping income.

School lays the foundations of aspiration and is vital to helping young people to build the skills they will need for the rest of their lives. This is particularly important in deprived communities, where schools are critical in expanding horizons.

In April the NEU demonstrated that SEND in particular is about £1 billion underfunded. Schools across England are struggling to provide the specialist support that some children need. Since 2015 the number of children requiring specialist support has increased by 33 per cent, while funding has only increased by 6 per cent. If this continues we will not only be failing to support some of our most vulnerable children with complex needs, we will also be increasing pressure on schools to raid their core schools budget to make up the difference.

While we’re at it, every further education college in the country has been particularly affected by cuts to education since 2010. The £1 billion extra I pledged, even before the Philip Augar review into post-18 education, will make a radical difference, widening routes to the workplace and expanding vocational education. Of course there is more work to do on reforming post-18 education, but this will be an important start, bringing positive benefits to schools across the country.

The public’s trust in the Conservatives has taken an absolute battering through our failure to deliver Brexit, but it is not only because of that. We have lost the trust of so many public sector workers too because we haven’t looked after them well enough and haven’t listened to them properly.

We have to put that right. In education we’ve got to listen to what the teachers and their unions are telling us, accept that they are the experts in this field and not treat them as the enemy as has too often appeared to be the case.

As prime minister, I won’t simply mend relations with teachers. I want them to become our partners in delivering a world-class education for our children. We have some of the best public servants in the world and it’s time Westminster started treating them with the respect they deserve so they can continue to provide the services for which we are all so grateful. In short we must start listening to teachers, not lecturing them.