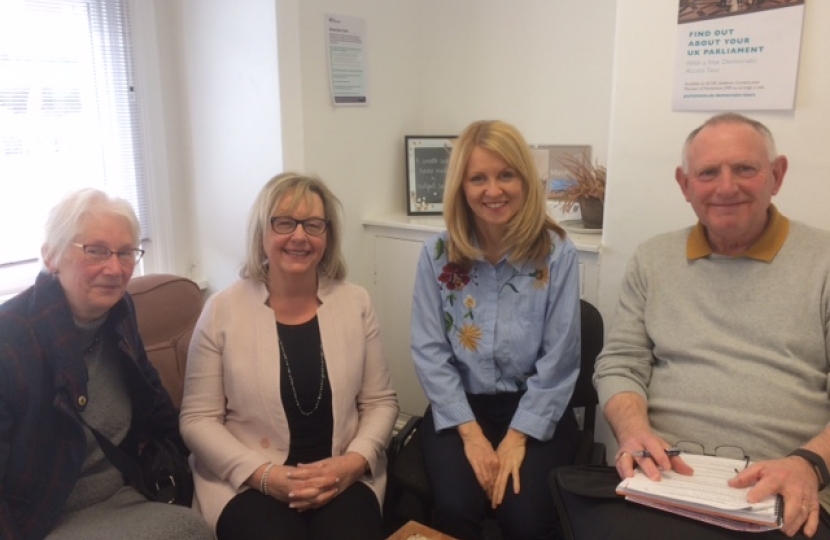 Tatton MP Esther McVey is urging Government to listen to a local geologist who says routing HS2 through an area of current and historical salt mining is not safe.

Ms McVey, who opposes the high speed rail project on the grounds that the economic case has not been made, says that in addition the geology of Cheshire is complex. She has written to Transport Secretary Chris Grayling setting out fears of retired geologist Ros Todhunter, following her latest meeting with mid Cheshire against HS2.

Ms McVey said: “As each day passes, the case for HS2 gets weaker. What the vast majority of the public want is a fast rail link connecting all the cities across the north of England as well as better local transport, not a vanity project whose cost keeps increasing. Furthermore local residents are concerned that the geographical complexities of Cheshire in terms of cost, design & safety have not fully been taken account of.

“I have been working with Mid Cheshire against HS2 since the election and we all have serious concerns.  Ros Todhunter explained the complex geology off Cheshire with salt caverns and lime beds and how this presents a problem for high speed trains that needs to be able to pass over stable ground. She is an expert in her field and it is vital Government listen to people like her, who are not only geologists but have the local knowledge too. We know there is a history of subsidence risk, so HS2 could not only impact the environment but also hit the taxpayer through increasing costs. It is an unnecessary project and I will keep opposing it.”

Within weeks of being elected in 2017 Ms McVey raised the issue in Parliament after meeting with concerned Ashley residents. She then met with Mr Grayling to detail fears of other constituents who had contacted her.

Ms McVey believes the focus should be on investing in local lines, improving rail links across Cheshire and in particular wants to see the re-opening of the Mid Cheshire line.

She added: “Cheshire is becoming a gridlocked car park and easing congestion on our local lines should be a priority. What is important to Cheshire is our continued economic growth and it is essential that we link up the county to make it easier to travel from one side to the other not focus on costly projects like HS2.”

Graham Dellow chairman of the mid Cheshire against HS2 said: “Members of Mid Cheshire Against HS2 met with Esther to discuss recent developments with the beleaguered HS2 High Speed Rail project that still threatens thousands of Esther's constituents and many more residents of wider Cheshire. The meeting was very constructive and plans were formulated for the ongoing campaign to STOP HS2 destroying huge swathes of rural Cheshire.”