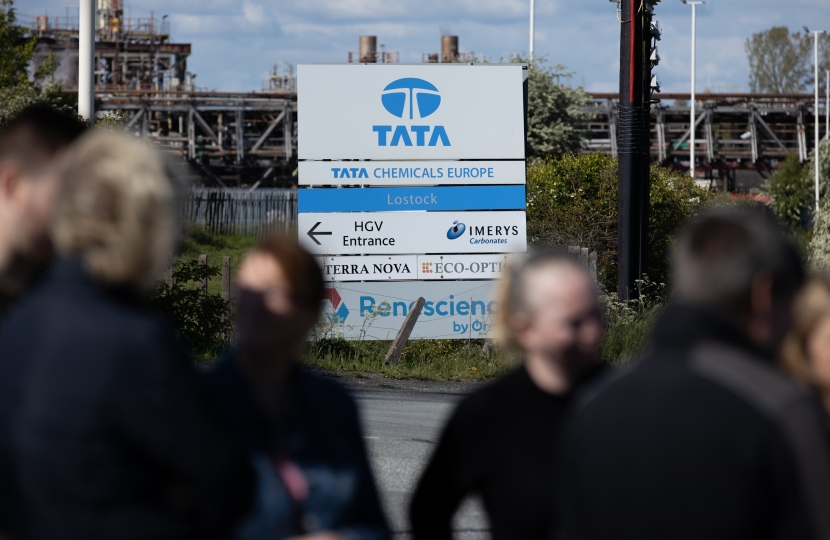 Formal plans to extend the burning capacity at Lostock Works incinerator have been submitted to Government – and Esther McVey is urging everyone against the plans to make their views known.

The Tatton MP , who opposes the expansion, said concerned residents should write to the Department for Business, Energy, and Industrial Strategy to ensure public opposition is noted.

Ms McVey said increasing the capacity from 600,000 tonnes to 728,000 tonnes was not needed given the excellent recycling rates across Cheshire and it was clear rubbish would need to be brought in from outside the area to keep the machine burning.

She said: “The extra capacity will be at the detriment of Cheshire residents. We will see a huge increase in traffic on King Street with HGVs bringing rubbish to the site and then we have the added emissions.

“Extending the burning capacity is unnecessary, especially at a time when we are all so focused on recycling and increasing recycling rates, it makes no sense. The only thing an expansion will do is create both health and environmental problems.”

As it stands waste is taken to the site between 7am and 7pm each day with a maximum of 131 drop offs each day or 262 round trips. But an expansion would see hours extend to 11pm to accommodate the additional HGVs, which could be as many as 217 each day – meaning more than 400 trips in and out of the site daily.

Ms McVey added: “There will be a constant stream of lorries on the road outside where families live. In the current climate when world leaders had two weeks of talks on how we all need to protect the planet, how hypocritical that leaders are not looking at what environmental issues are happening in their own back yard.”

Ms McVey has opposed the incinerator since becoming an MP and has met with Government ministers to set out her opposition. She also previously wrote to Cheshire West and Chester Council urging them to formally oppose this plan in a letter to Government.

As planning permission was granted in 2012 and these proposals are not to expand the incinerator but to change capacity a new planning application does not have to be submitted. Instead, a decision is taken by Whitehall which will consider the view of the governing local council.

The public and stake holders have until Thursday December 2 to comment on the submission and can email beiseip@beis.gov.uk referencing 'Lostock Sustainable Energy Plant - Section 36 Consent Variation Application'.

The Prime Minister has warned Avanti it must get back on track and deliver for Tatton’s rail users - following demands from Esther McVey to ensure her constituents get a service fit for purpose.