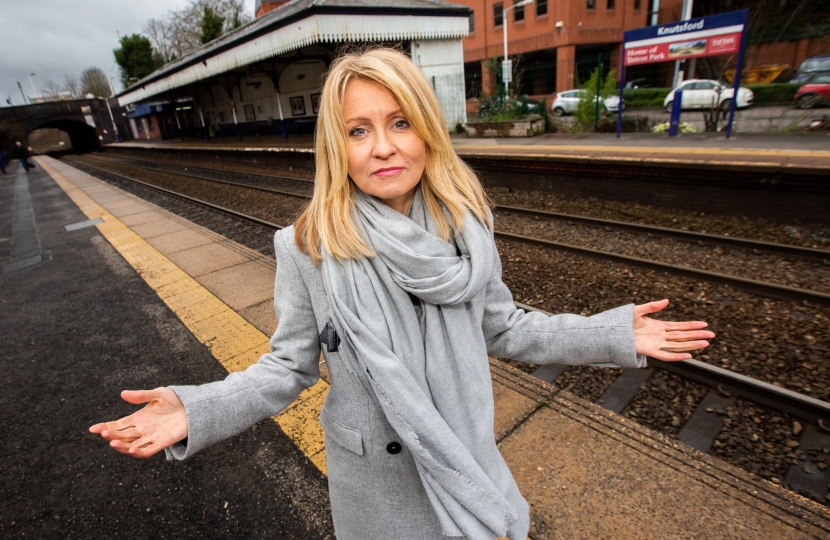 Esther McVey is urging people to have their say over plans to improve rail provision in the area – which could see the promised two trains an hour from Knutsford and Northwich to Manchester delivered.

A joint consultation from the Department for Transport, Network Rail and Transport for the North is currently underway into train services to simplify and space services more evenly, tackle congestion and minimising delays to services.

The consultation has four options including making no changes to the current timetable.

The Tatton MP has submitted a response and is hoping others will do the same to help secure the service promised years ago of two trains an hour from Northwich and Knutsford to Manchester.

She said: “My constituents deserve a train service which is fit for purpose and I hope this consultation can deliver that. It is a great opportunity to secure the two trains an hour and improve capacity on the line as well as tackling reliability. Many people contact me raising the lack of services into Manchester and pre Covid they were telling me they would drive in or travel any other way possible rather than train because it is so unreliable.  It is a huge issue and we need these two trains an hour so after considering all the options in the consultation I have submitted by response saying option C is my preferred option. I appreciate that there are trade-offs for this option but I feel it will positively impact more residents than those negatively impacted by it.”

The two trains per hour were part of the franchise bid by Northern in 2015 but Ms McVey has been repeatedly told it cannot be delivered due to capacity issues. If option C is the preferred outcome of the consultation, changes to the timetables would free up capacity on the line allowing it to go ahead.

Transport Minister Chris Heaton-Harris said the rail network in the North had “fallen short” of delivering the services passengers need and deserve.

He added: “While the public are being urged to stay at home currently, it is right that we look ahead to improving our railways for when they return in large numbers. This is so they are encouraged to return to train travel - a green mode of transport when the time comes, helping take cars off roads and improving air quality in our communities.”

THIS upcoming budget is one of seismic importance. It is one which needs to focus exclusively on getting the country up and running again after the economically destructive lockdowns.