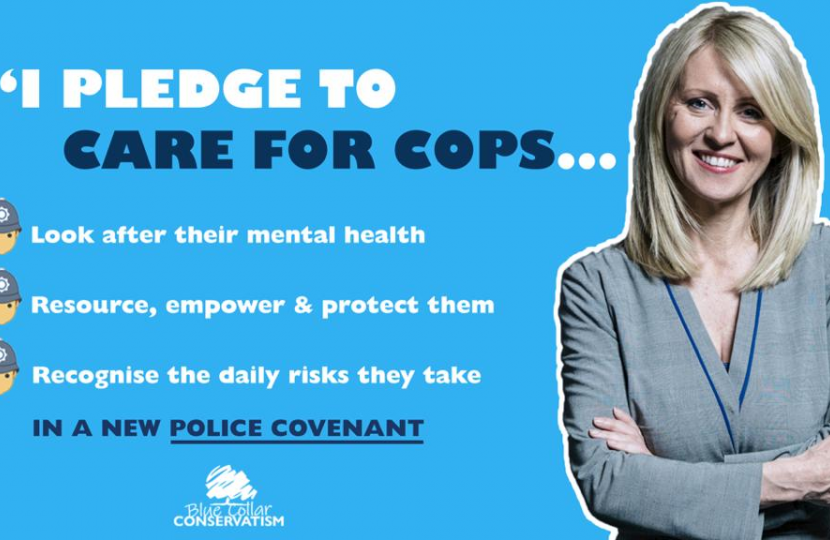 Government must push ahead with plans to increase jail time for assaults on emergency workers, Esther McVey has warned – as new figures show nearly 50 Cheshire Police officers are being attacked each month.Official figures show in the 12 months to April this year, 596 assaults were recorded on officers, a small reduction from 625 in 2018/19. A four-week consultation is currently underway which could see the maximum sentence for anyone guilty of assaulting an emergency worker increased to two years.

The Tatton MP said Government must find in favour of the consultation and be on the side of the Police and not favour the current 12-month maximum sentence.

She said: “One attack on a Police officer or any emergency worker is one too many and while a reduction in numbers is welcomed, these are still worryingly high incidents of officers, who are putting themselves in danger to protect us, being assaulted.

“We need to send out a strong message that anyone guilty of assault on an emergency worker will feel the full force of the law and be handed a hefty sentence.

“We must be a Government of law and order and focus on the rights of law-abiding citizens and those people trying to protect us.”

Of the 596 assaults across the county, 222 resulted in injury. Across England and Wales there were 30,679 assaults recorded in the latest 12-month period.

It come as other data shows since the start of Government’s recruitment drive to get an extra 20,000 officers by 2023, to date 4,336 have joined, of which 54 are in Cheshire.

Ms McVey said: “People want more Police on the streets and this Government is committed to delivering this. As more officers join in the coming months and years, they need to know they will be protected.

“I campaigned for an increase in sentencing for emergency workers and I am delighted Government is listening by holding a consultation. Now Government must listen to the public and support our emergency workers by increasing the sentence they can be given so they will know anyone guilty of assault will not be let off with a warning but face two years behind bars.”