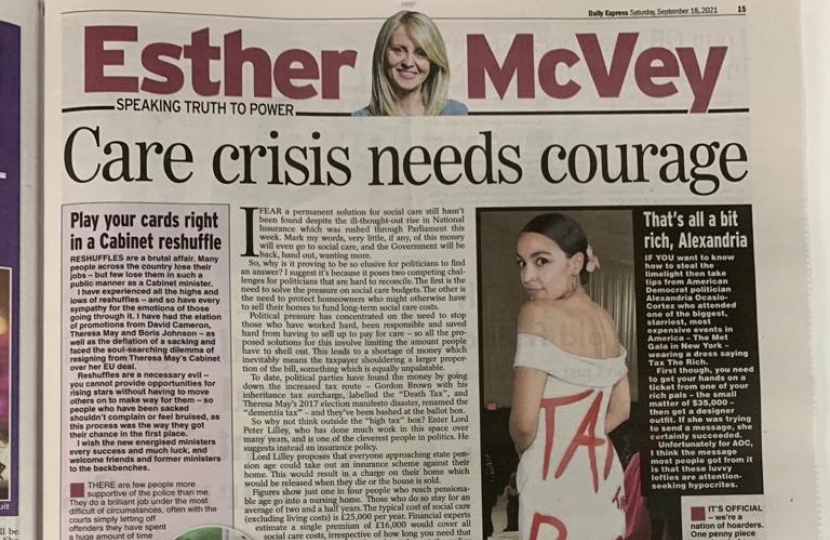 I FEAR a permanent solution for social care still hasn't been found despite the ill-thought-out rise in National Insurance which was rushed through Parliament this week. Mark my words, very little, if any, of this money will even go to social care, and the Government will be back, hand out, wanting more.

Political pressure has concentrated on the need to stop those who have worked hard, been responsible and saved hard from having to sell up to pay for care ‑ so all the proposed solutions for this involve limiting the amount people have to shell out.

This leads to a shortage of money which inevitably means the taxpayer shouldering a larger proportion of the bill, something which is equally unpalatable.

To date, political parties have found the money by going down the increased tax route ‑ Gordon Brown with his inheritance tax surcharge, labelled the "Death Tax", and Theresa May's 2017 election manifesto disaster, renamed the "dementia tax" ‑ and they've been bashed at the ballot box.

So why not think outside the "high tax" box? Enter Lord Peter Lilley, who has done much work in this space over many years, and is one of the cleverest people in politics. He suggests instead an insurance policy.

Lord Lilley proposes that everyone approaching state pension age could take out an insurance scheme against their home. This would result in a charge on their home which would be released when they die or the house is sold.

Figures show just one in four people who reach pensionable age go into a nursing home. Those who do so stay for an average of two and a half years. The typical cost of social care (excluding living costs) is £25,000 per year.

Financial experts estimate a single premium of £16,000 would cover all social care costs, irrespective of how long you need that care. Nobody would be forced to take out the policy but obviously if you didn't, you could pay more than this reduced pooled level.

This would need to be a state-run insurance scheme ‑ not least because the uncertainty of future government policy changing again is deterring the private sector from wanting to take part, and to be fair, who can blame them?

Whilst a state-run insurance scheme wouldn't be my first choice, being pragmatic it's the only way to make it work. The advantage is that it may reduce Labour opposition, and so a change of government would not see the scheme scrapped or changed which is crucial for a sustainable solution to the problem. It would also mean that the money would go into social care ‑ and social care alone.

Without doubt, we will come back to the thorny issue of funding social care once the hike in National Insurance is shown to have been diverted to cover the core NHS budget without social care getting a look in.

I just hope that the Government will be brave enough and forward thinking enough to accept Lord Lilley's suggestion, and that Labour will be less blinkered and rigid and be prepared to accept it too.

It's about time this issue found a cross-party sustainable solution which ensures people get the social care they need without having everything they have worked for being confiscated. It has been a political football for way too long.