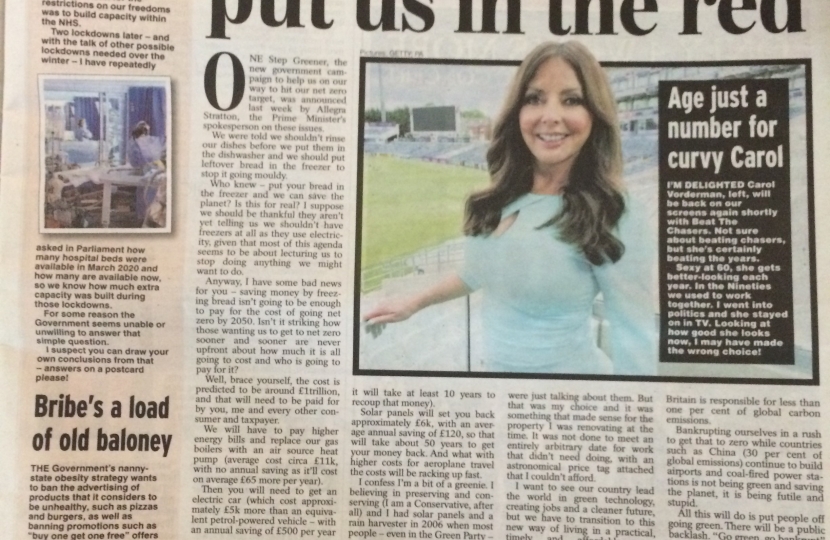 ONE Step Greener, the new government campaign to help us on our way to hit our net zero target, was announced last week by Allegra Stratton, the Prime Minister's spokesperson on these issues.

We were told we shouldn't rinse our dishes before we put them in the dishwasher and we should put leftover bread in the freezer to stop it going mouldy. Who knew - put your bread in the freezer and we can save the planet? Is this for real? I suppose we should be thankful they aren't yet telling us we shouldn't have freezers at all as they use electricity, given that most of this agenda seems to be about lecturing us to stop doing anything we might want to do.

Anyway, I have some bad news for you - saving money by freezing bread isn't going to be enough to pay for the cost of going net zero by 2050. Isn't it striking how those wanting us to get to net zero sooner and sooner are never upfront about how much it is all going to cost and who is going to pay for it?

Well, brace yourself, the cost is predicted to be around £1trillion, and that will need to be paid for by you, me and every other consumer and taxpayer.

We will have to pay higher energy bills and replace our gas boilers with an air source heat pump (average cost circa £11k, with no annual saving as it'll cost on average £65 more per year).

Then you will need to get an electric car (which cost approximately £5k more than an equivalent petrol-powered vehicle - with an annual saving of £500 per year it will take at least 10 years to recoup that money).

Solar panels will set you back approximately £6k, with an average annual saving of £120, so that will take about 50 years to get your money back. And what with higher costs for aeroplane travel the costs will be racking up fast.

I confess I'm a bit of a greenie. I believe in preserving and conserving (I am a Conservative, after all) and I had solar panels and a rain harvester in 2006 when most people - even in the Green Party - were just talking about them. But that was my choice and it was something that made sense for the property I was renovating at the time. It was not done to meet an entirely arbitrary date for work that didn't need doing, with an astronomical price tag attached that I couldn't afford.

I want to see our country lead the world in green technology, creating jobs and a cleaner future, but we have to transition to this new way of living in a practical, timely and affordable way.

Britain is responsible for less than one percent of global carbon emissions.

Bankrupting ourselves in a rush to get that to zero while countries such as China (30 percent of global emissions) continue to build airports and coal-fired power stations is not being green and saving the planet, it is being futile and stupid.

All this will do is put people off going green. There will be a public backlash. "Go green, go bankrupt" is not an election-winning slogan.