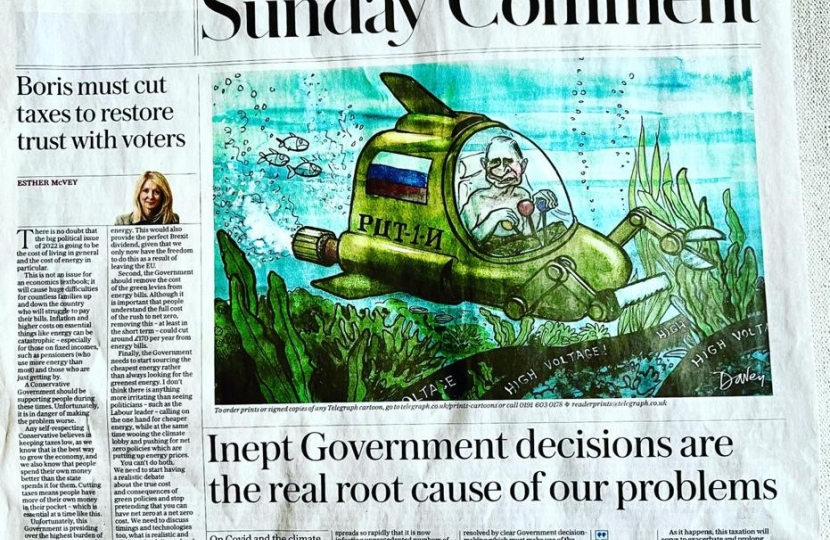 There is no doubt that the big political issue of 2022 is going to be the cost of living in general and the cost of energy in particular.

This is not an issue for an economics textbook, this will cause huge difficulties to countless families up and down the country who will struggle to pay their bills. Inflation and higher costs on essential things like energy can be catastrophic – especially for those on fixed incomes like pensioners (who use more energy than most) and those who are just getting by.

A Conservative government should be supporting people during these times. Unfortunately, it is in danger of making the problem worse.
Any self-respecting Conservative believes in keeping taxes low as we know that is the best way to grow the economy, and we also know that people spend their own money better than the state spends it for them. Cutting taxes means people have more of their own money in their pocket – which is essential at a time like this.
Unfortunately, this Government is presiding over the highest burden of taxation for 70 years and is planning on higher taxes in April with a damaging increase in National Insurance Contributions.

I hope the Chancellor will reflect and not go ahead with this further tax rise, which is a tax on business and one that impacts the lower paid most of all, and look at ways to cut taxes instead.

The cost of energy is the single biggest concern for this year and again the Government is in a position to help people with this. There are three measures which the Government should implement.

First, it should abolish VAT on domestic energy. This would also provide the perfect Brexit dividend given that we only now have the freedom to do this as a result of leaving the EU.

Finally, the Government needs to start sourcing the cheapest energy rather than always looking for the greenest energy. I don’t think there is anything more irritating than seeing politicians – like the Labour leader – calling on one hand for cheaper energy, whilst at the same time wooing the climate lobby and pushing for net zero policies which are putting up energy prices.

You can’t do both. We need to start having a realistic debate about the true cost and consequences of net zero and stop pretending that you can have net zero at a net zero cost. We need to discuss timings and technologies too, what is realistic and what can be delivered and by when.
This is a big year for the Government, but taking these steps to show that we are on the side of the hard pressed public and understand their concerns will be the biggest step we can take in restoring people’s confidence in this Government.