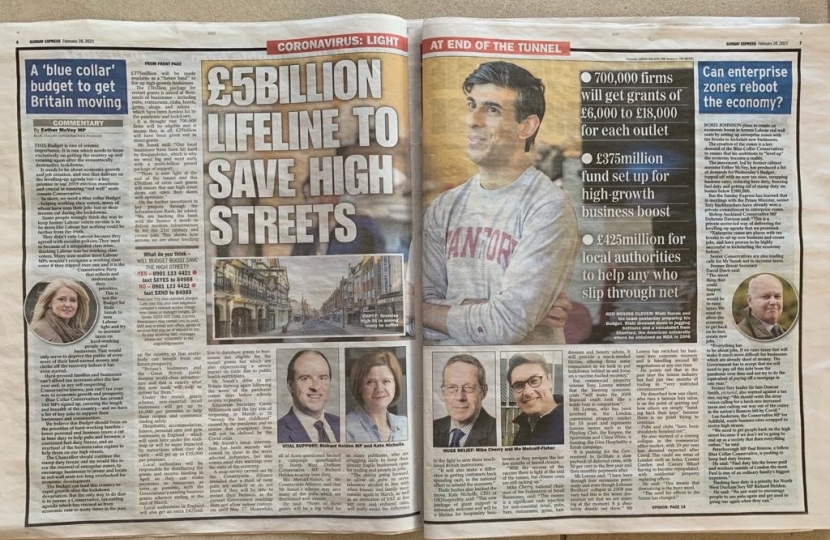 THIS upcoming budget is one of seismic importance. It is one which needs to focus exclusively on getting the country up and running again after the economically destructive lockdowns.

This budget needs to be about economic growth and job creation, and one that delivers on the levelling up agenda too, which was a key promise in our 2019 election manifesto and which is crucial in ensuring those red wall seats remain Conservative after the next election. In short we need a blue collar budget – helping those working class voters many of whom have seen their jobs lost or their income cut during the Covid lockdowns.

Indeed they used to vote Labour despite their policies because of a misguided class issue thinking wrongly that Labour was for working class voters.

Many of those voters have now realised that most Labour MPs wouldn’t recognise a working class voter if they tripped over one and that actually it is the Conservative Party that best reflects and understands the priorities of blue collar voters.

This isn’t the budget for the Chancellor to turn Labour light and try to increase taxes on hard working people and businesses - to do that would only serve to deprive the public of even more of their hard earned money and choke off the recovery before it has even started.

Hard pressed families and businesses can’t afford tax increases after the last year and, as any self-respecting Conservative knows, you can’t tax your way to economic growth and prosperity. The Chancellor must not increase taxes in any way, shape or form.

Blue Collar Conservatism has around 160 MPs in the House of Commons signed up representing seats covering the length and breadth of the country and we have a list of key asks to support their local businesses and communities.

We believe this budget should focus on the priorities of hard working families – lower personal and business taxes, a cut in beer duty to help struggling pubs and brewers, a continued freeze in fuel duty, and to radically overhaul the business rates regime to make it cheaper for those on our high streets and to help them compete with their online competitors.

The chancellor should continue with the stamp duty freeze which is helping those trying to get established on the housing ladder, and we would like to see the renewal of enterprise zones to encourage businesses to invest and locate in those red wall seats which for too long had been overlooked for economic development.

The Chancellor’s budget can lead this country to rapid economic growth after the devastation of lockdowns over the past year. But the only way to do that is to pursue a Conservative tax cutting agenda which has rescued this country from economic ruin so many times in the past.

HOUSING is the ultimate example of supply and demand. The problem is that there is too much demand and not enough supply, and to solve that problem we need to tackle it from both directions.